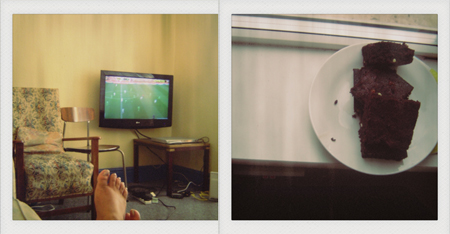 It’s 3 p.m. in the afternoon. The outdoors is at a sunny 22° C. I’m snuggled against a 1984 Argos couch in the living room watching England play against Slovenia, hoping that this time it wouldn’t be as painful as it was the last time.

Earlier today , I had tried….tried desperately to cook myself a decent meal of grilled chicken breasts stuffed with mozarella. It wasn’t as successful as I had wanted it to be. Due to lack of string or toothpicks to hold the damn breasts together.

Somehow, this day is not agreeing with me. My room is currently not very different from a blast furnace, which makes it absolutely impossible to work in it. Last night’s party has contributed to very little sleep and hence it is with difficulty that I’m trying to focus on the goal Dafoe just scored for England. But all is not lost. I am looking forward to the grocery store trip I’m planning to conduct in an hour. And also I’m looking forward to downing a few pieces of ‘luxurious’ brownies (shamelessly nicking the name from Tamami), I whipped up early in the morning. Inspired heavily by Fanny’s recipe.

If I start describing how the brownies turned out, it would probably bleed over to two or more posts. All I can say, is that, they’re luxurious indeed. The dark chocolate leaves a heavenly after-taste in your mouth and the amount of sugar is just right, especially for someone like me (who’s compulsively picky about anything sweet). I did modify the recipe according to my taste, of course. My allergy to following recipes word-to-word kicked in, I suppose.

I replaced plain flour with self-rising flour which makes the brownie slightly less dense, but gorgeously chewy nevertheless. The cocoa powder was Green & Black’s 70% and a tablespoon of instant coffee makes all the difference. It transforms the simple brownie into an indulgent and strangely addictive dessert (the word ‘snack’ here would be a complete understatement). Its sticky to the right texture, dark, handsome, chewy, fluffy and unforgiving. I won’t lie to you….this brownie will make you feel seriously guilty.

I’ll stop writing now and make another trip to my refrigerator.

No. I’m not actually saying “no” to brownies! I couldn’t possibly do that…ever!!

But I’ve noticed how every time I prowl around the kitchen, pantry and stick my nose into the refrigerator looking for something to snack on, I mostly choose things that I can just pop into my mouth, rather than those which would require the use of forks and spoons and plates. So I came up with brownie squares. Yes, its just a brownie tart chopped up into pieces for my convenience.

Its technically not the end of the week, I know, but I just couldn’t stand “no-baking-for-a-week” anymore!

This one’s a simple 3-layers recipe really; 1 layer of chocolate brownie crust, 1 layer of lemon pudding and the topmost layer is a chewy mocha meringue.

– 75gms of unsalted butter, cold and cut into chunks

Blitz to mix the flour, sugar, salt and cocoa powder in a processor. Add the butter and mix again till the mixture becomes crumby. Pour it out on a working surface or a bowl. Add the egg yolk and start kneading gently. Gradually add the cold water to form the dough. Wrap with cling foil and chill in the refrigerator for about an hour.

Pre-heat the oven to 180 degrees. Prepare a baking tin. Roll out the brownie crust carefully and place it into the baking tin, trimming the edges accordingly. With a fork make piercing all over the crust (so it doesn’t rise up while baking). Bake for 15-20 minutes.

– Juice and zest of 1 lemon

– 1/2 teaspoon of freshly ground coffee (you could also use instant coffee mix, the taste would alter though)

This layer’s technically not meringue-like, since we whip the egg white to a frothy texture, rather than a shiny one. The frothiness makes it turn chewy while baking. Add the coffee and sugar gradually while whipping the whites till they form soft frothy peaks.

Pour the lemon pudding over the pre-baked crust and pipe out the mocha “meringue” on top. Bake for 12-15 minutes in a pre-heated 350 degrees oven or till the meringue is dry and chewy.