…making ice cream, that is.

I did contribute to a luscious white chocolate and cinnamon ice-cream at my friend Aditya’s place about a year back. I was responsible for the custard and he did all the physical work required. It was an achievement where I was concerned, since back then, the only other thing I could make apart from custard, was coffee. The credit for how and where I learned to make custard, goes to my mother, who would make me accompany her in making caramel and fruit custards for dessert whenever we had special guests over. My job in all that custard-making was to pour out the liquids into individual serving bowls and spoon in sauce over the caramels.

But I watched and learned. And it has finally paid off.

I’m a little late actually with my current tub of ice-cream, since summer’s been long gone here. But mangoes are still flecking the market and we have kilos of it stuffed into the refrigerator.

Indians love their mangoes…no conditions, no doubts and no species spared. If we’re not making lassi or aamras, we’re either making kulfi or just contentedly sucking the stone-seed dry on warm, humid afternoons. And then we have some more after dinner.

Before this, I had been satisfied with the humble espresso slushy, that I had taken so much pain in whipping (breaking up the ice crystals, they call it) with all my physical strength. It did turn out slightly crunchy…but only slightly, mind you.

This time taking no chance, I used a blender. 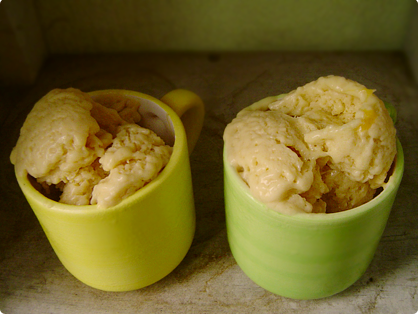